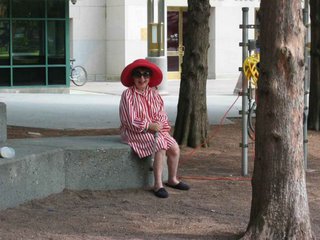 We drove around lots of construction trying to find the museum and ended up parking on a blocked-off street next to some really loud music and amplified voices. It turned out that it we were parked next to the finish line for the Marathon and it was just over. So people received their awards and walked right by the bell on their way home. I rang it for every person who was announced- not that anybody noticed.

Norman’s sister didn’t like that nobody was coming to ring the bell so she went into the little park in front of the museum and told the kids who were playing there to go over and ring the bell. So they did. Some of them had been playing in the fountain and brought their dad who had won first place in the men’s division. It was very exciting.

So the kids rang the bell and got their pictures taken for the newspaper. The same photographer who was covering the marathon had to shoot pictures of the bell. He wasn’t happy about it, either. He didn’t want to ring the bell and certainly didn’t want any postcards. He said he had enough junk, basically. I wanted to ask him why he was so averse to ringing the bell but didn’t want to antagonize him. But I think from now on, I’ll risk it. What the hell? It’s my bell and while I’m not out to piss anybody off, I am interested in all reactions and shouldn’t waste the opportunity to ask.

Norman’s sister said if those kids hadn’t come to ring the bell she would have felt it was a failure. To the contrary, today clarified something for me about what’s going on. There seems to be 2 types of events. One is where I invite people to ring the bell- It’s kind of fun and I enjoy trying to get people to stop and I like talking with them and hearing what they have to say about the whole thing. The other type of event is more personal and I am going to do it more and more. It’s why I am ringing the bell. So far the only times I have done this is when there is nobody else around. That’s when I stand and ring it for an hour or so. It’s very solemn and purposeful. So far, I am ringing the bell for the dead. It’s inevitable and I want to make the most of this opportunity to do so.

So from now on, I plan to ring it each day by myself. When the occasions present themselves to invite others, I will ask them to ring it, too. For whatever reasons they like.

I wonder what happened to the bright young percussionist named Brenda Hutchinson, that I played in the Kiltie Band with some 30 years ago? Proud of you.
Tom Watson - Pittsburgh, PA.