9/15/06 Hostel in the Forest. Brunswick, GA.
Rather than describe the whole place, I recommend that anyone reading this go to this website and check it out. Read the list of rules. Look at the pictures. Then come back. www.foresthostel.com 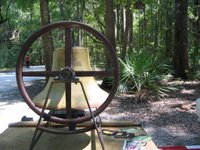 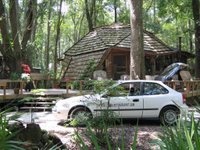 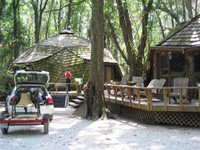 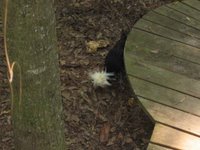 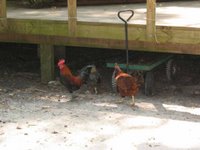 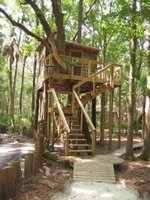 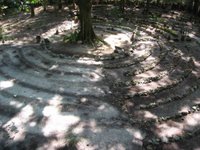 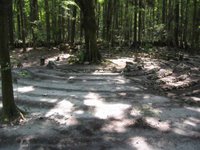 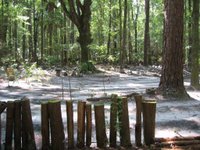 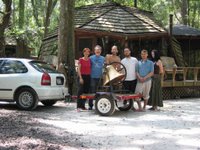 We arrived last night in the dark and had to walk from the car through the woods to get to the hostel. It was scary and very dark- I heard a noise in the trees off to the side of the path and got out my cell phone to call them at the desk. I got the machine. So we walked until we saw some little lights through the trees. It was a little buggy, too.

The lights came from some geodesic domes that were all connected with wooden porches, and we found the one that looked most like it would have a lobby. There on the desk was the phone- off the hook. We followed some voices and found a few guys having dinner in the next dome where they invited us to join them. Since we had already eaten, we just hung out until they were finished and then Mikey gave us a tour and orientation. He didn’t even need a flashlight so we stumbled along behind him in the dark and heard about all the places we could visit in the morning when we could see.

Our place, the Bamboo House, was one of 8 tree houses and it was lovely. There was a ceiling fan and light and some candles. The forest was filled with sounds of insects and later in the middle of the night- a rooster off to an early start. The grain in the wooden floor was embellished by either tracing with a sharpie or blacking with a wood-burning tool. The lines in the wood would become snakes or intricate designs then revert to woodgrain again. It was pretty incredible.

Looking down from the porch in the morning, I saw a huge labyrinth (the 4th largest in the world). If you sliced the circle into a pie, each quarter was created with a different material and element in mind. The path on one quarter was made with white sand that contrasted with the black sand dividers. Another path was defined with piles of big stones. A trail of tree stumps formed one quarter and the last was made with leaves and pine needles. It was huge and intricate and felt in touch with something ancient and slow.

Before leaving, we did some chores, rang the bell and called the chickens over. There were some very odd-looking birds living a very good life.

I was there and stayed in the Bamboo Hut not but 4 weeks ago. Thanks for posting some pictures of The Hostel. Beautiful place isn't it?
-Clay Smith
guitarguru02@charter.net

I stayed in the bamboo hut this past Sunday. What a magical room!

Do you have any pictures of the bamboo pentacle above the bed?

I stayed in the bamboo hut this past Sunday. What a magical room!

Do you have any pictures of the bamboo pentacle above the bed? I would love to have an image of that, it means a lot to me.