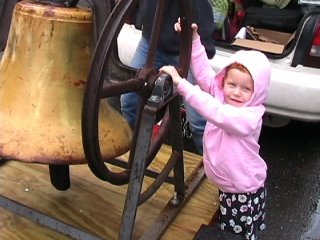 
Thank you, also to Sherri for a wonderful visit.
Posted by Brenda Hutchinson at 9/15/2006

Brenda, this was so cool to ring the bell and re-live that feeling of being a fourteen-year-old explainer again-- rushing to be the first to get to the bell at 5:00 o'clock. What could be more fun than making such an incredibly loud noise that everyone in the entire museum would stop what they were doing and look up to see what the bell meant? When the old bell was suspended from the ceiling at the Explo, it was so heavy that if I held onto the rope as it swung up it would lift my whole body right off the ground! I can't wait to see this bell at the museum!
--Caitlyn