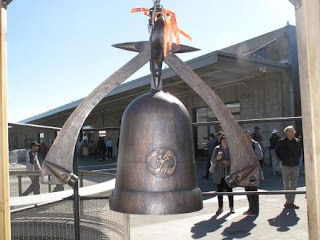 Julie Caine of KALW wrote a nice piece about the history of the bells at the Exploratorium and it is included in the Audiograph Sound of the Week invitation. Have a look and a listen.
(photo courtesy KALW)
FYI- one of those old noisy bells is the one I delivered at the end of this journey in 2006.
Enjoy!
Posted by Brenda Hutchinson at 4/22/2013

Today, I went to the beach with my kids. I found a sea shell and gave it to my 4 year old daughter and said "You can hear the ocean if you put this to your ear." She placed the shell to her ear and screamed. There was a hermit crab inside and it pinched her ear. She never wants to go back! LoL I know this is completely off topic but I had to tell someone!