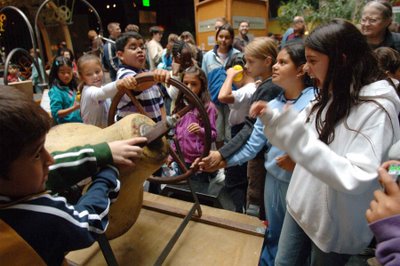 DAY 36 The Bell arrives at the Exploratorium

The current bell housed at the museum is a much smaller bell that was cast in China. The sound quality is thin and high pitched. It is pretty loud but it’s not a particularly rich or interesting sound. A poor replacement and stand-in bell for the once beautiful tones made by the old bell belonging to the Oppenheimers. People wanted to compare the 2 bells. SO we rang them one after another. Back and forth from one side of the museum to the other. As a comparison, the new bell sounded much better. It was like resurrecting a ghost. Suddenly, the museum sounded like it used to, and it was magical and wonderful to be transported back in time. Then, suddenly, both bells were sounding at once, and it was even more incredible. They sounded so good together. Two large, loud bells dominating - for one suspended moment - the entire museum. They were the loudest things going. Louder than the exhibits. Certainly louder than anyone speaking. It was impossible to say or do anything else for a moment, and it was glorious. For an instant, everyone was enveloped in the sound created by these 2 bells and that would be the sound that would close the museum everyday from now on. It couldn’t have been more wonderful.

So. That was that. We took the trailer back to the car, moved the bell into the theater for the weekend presentations and left. End of the road.

What a great project!
I wish I'd known about it when you were in NYC - I would have come to the 6th street & Ave. B garden.
I am a bell ringer and collector (you can listen to my bell ringing and also musical saw playing at http://www.SawLady.com ). I forwarded your info to the American Bell Association, thinking that maybe they would like to feature an article about you?
All the best,
Natalia

I'm a memeber of The American Bell Association. On your trip across the southern part of USA you stopped in Tucson Arizona. There are several ABA bell collectors in that area. Too bad the newspapers didn't let us know that "YOU WERE RINGING YOUR WAY THROUGH OUR TOWN"!!!! We'd a come out ta support ya.. eclectic bell collector